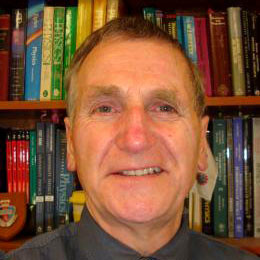 Stewart Campbell is Emeritus Professor of Physics in the School of Physical, Environment and Mathematical Sciences at UNSW Canberra. He has published around 300 papers and three book chapters. Among his editorial responsibilities include: chief co-editor for international conferences on Mössbauer spectroscopy (ICAME1987), magnetism (ICM1997) and neutron scattering (ICNS2005); he has also served as a member of the Editorial Advisory Board of the Journal of Alloys and Compounds.

His research interests centre on experimental and analytical studies in the field of condensed matter and materials physics, with current research focussed on the structural and magnetic properties of rare earth intermetallic compounds, nanostructured and spin crossover materials. The research projects at UNSW Canberra are carried out in collaboration with colleagues from Australia and overseas, including colleagues from Germany, Belgium, the Netherlands and the UK.

Stewart Campbell has served on the Advisory Boards and Programme Committees for numerous international conferences. He has also served as the Australian IBAME representative for 20 years (1994-2014) and continues to serve on a number of national and international scientific bodies including IBAME committees and the MEDC International Advisory Board. He was awarded the AINSE Gold Medal for Excellence in Research in 2007.